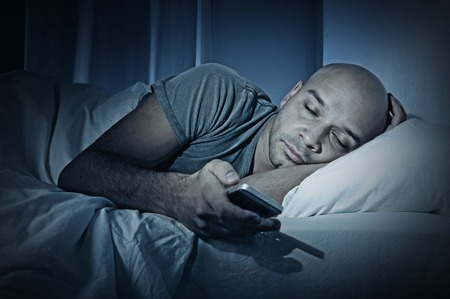 In one of the most celebrated plays of the 20th century, Waiting for Godot, two characters have a variety of arguments and rambling conversations while waiting for someone who never appears. It’s an apt metaphor for people and events we all wait for that are illusory. One of them these days is a phantom plenty of us are expecting but that never arrives.

Across the nation vigilant souls await, standing ready by their phones and keyboards for something. They don’t know what. They don’t know when. All they know is they have to be glued incessantly to their devices in case this unknown thing should appear.

The email is set to check continuously. Notifications are ready to relay an instant visual alert on the screen of choice of the thing-that-could-be-coming. People are afraid to not check email for an hour or on the weekend or vacation lest their Godot should arrive. The e-sentry duty is all on account of a widespread fear afflicting millions—of missing something important, say, an emergency.

It’s a state of constant expectancy that undermines attention, the chief productivity tool, and impulse control, and drives information overload, time urgency, stress, burnout, mistakes, and poor work-life balance. And it’s all a big mistake. Emergencies should always be handled by phone and never by email.

The workplace is awash with false beliefs that fuel the opposite of effective performance, and this is certainly one of them. The assumption behind the I-don’t-want-to-miss-something autopilot is faulty, because it’s based on the hub of poor decision-making, fear. Being on guard for every email that comes in 24/7 for fear of catastrophes that might happen if we don’t is not an effective use of time. The interruptions blow up working memory and subvert impulse control, which shrinks attention spans and the discipline needed to stay on task.

It’s part of the survival instinct for humans to be on the lookout for possible threats to life and limb, but those are not going to happen via email. Every organization needs to free the attentions and time of staff with a more productive approach to email monitoring and communicating which things are really important. That starts by defining the thing that everyone is sitting around waiting for: the emergency, and the proper response to it— reaching out by phone.

Every team in the company needs to have a clear understanding of what constitutes an emergency or something extremely urgent that demands an instant response. Spell out which scenarios are in the emergency category and which are not. Specify the expected actions and responses if those circumstances occur. For instance, when a certain situation occurs, the first course of action is a phone call. Despite the best vigilance of email-watchers, emails get lost, buried, misinterpreted, sent to spam folders, and addresses get typo-ed. When you need to get hold of someone NOW, call them.

Vagueness is the enemy of effective work. Clarity on the nature of an emergency as well as on when email availability is expected and not expected can help regain uninterrupted, productive time and free up recovery time after work. Studies show that minds that don't switch off work strains at home are destined to return to work the next day with negative affect and strain unalleviated—which undercuts attention and task performance.

The amazing thing is that prior to the email era, businesses actually made money, grew, functioned, and handled emergencies without a single click. The tool that made it happen was the telephone. There is evidence that some leaders concerned about performance are rediscovering the importance of the phone and reducing email usage. Deloitte and U.S. Cellular are two companies that have mandated less email use and report increased productivity and rapport between employees as a result.

I led a productivity training for managers at Lockheed Martin, and during the section on email I had one manager volunteer the fact that, unlike every one of the other managers going bonkers from email overload in the room, he didn’t have an email problem. There was immediate wall-to-wall jaw-dropping. He told the stunned group, “I just tell my people I’d rather be contacted by phone. If you have to email, make sure it’s important.”

Those two things alone made his job, identical to that of others in the room, not fraught with excess email. Email invites extra contact because it’s so easy to do. Something that has to rise to the level of a phone call automatically weeds out the nonessential and random thoughts that are sent because it’s easy to sit back and click whatever is top of mind.

One of my clients, JamesandMatthew.com, an advertising and marketing firm in Boston, decided to dramatically reduce email by moving most communications to the project management software Base Camp. It lets them put all their communications in one place, per project. Instead of having email boxes flooded, everything is on a page that staff can check when they want. This allows each person to set the terms of engagement with email, putting them in control, which stops incessant interruptions and the overwhelm and stress that comes with it.

Caught up in continual email loops, CEO Matthew Maguy had to find a way to control the beast. “One of the hardest things for us to understand as a team was that email was a massive time vampire," he says. "You can become addicted to it, hitting refresh every two minutes, waiting for the next surprise to come in. Before you know it, your day is over and all you've done is answered emails. This creates a culture wrapped around being reactive as opposed to proactive. Software like Basecamp and Slack allow you to control the information and volume and timing of notifications you get bombarded with, so you can focus on being proactive. Even better than that, you have an information structure that is easier to navigate. Too many of us were wasting time hunting through email archives or searching for attachments.”

There is a reluctance to control email in many organizations, but I sense this is changing as the email tonnage mounts. It’s not just the frustration and wear and tear on employees, it’s the productivity and performance implications of having a third of the day and more tied up in email, which is the average for people getting more than 100 emails a day. A study done by Intel found that the cost of email overload in lost productivity for a company with 50,000 workers is a stunning $1 billion a year.

The real emergency is the colossal waste of time, resources, and anxiety burned up on an e-fallacy.

If you would like to get the email, device, and interruption siege under control at your organization and dramatically improve productivity in the process, click below for details on our productivity, work-life balance, and information management programs.