Bounce Back from Anything with the Resilience of Life's Silver Lining 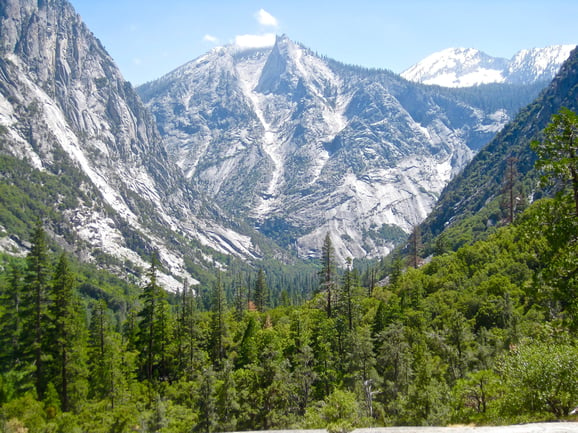 TO ERR IS HUMAN; to forgive divine. Especially when it comes to forgiving ourselves. It’s hard to let an unforced error or rough event go. We can be tougher on ourselves than the worst boss. That’s despite the fact that most of life is trial and error.

Setbacks shake our confidence and faith, but they are not the end, even if they seem that way. That is because the essence of our species is adaptability and resilience. It’s hard to see that when we are in the middle of adversity, but we are super-hardy characters.

Life itself is tenacious. I was hiking in Kings Canyon National Park a couple weeks ago on a trail that leads into the backcountry of one of America’s wildest parks. The trail follows the ascending South Fork of the Kings River, a raging whitewater flood after this year’s snows, and rises in the shadow of massive granite cliffs on either side gouged out by glaciers thousands of years ago to form a natural stadium carpeted by conifers.

Yet even on the steep walls of granite, it was easy see how stubborn life is. Sugar pine and manzanitas pop out from slivers of cracks in the sheer granite. Seeds blown hundreds of yards by gusts or deposited by birds fell into cracks, and nature did the rest. The trees hang on as if glued to the rock through bitter, stormy Sierra winters, roots battling solid rock to make a stand where they have no right to be. 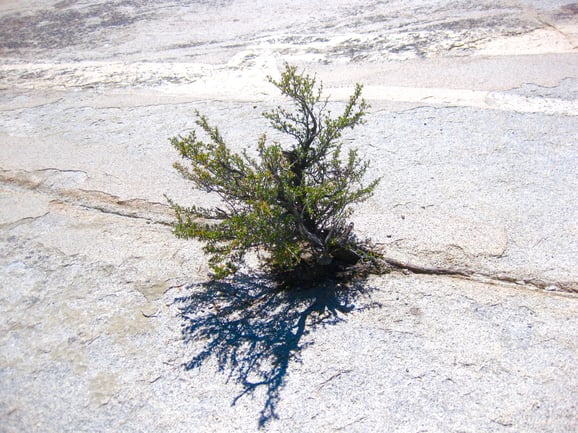 Get a foothold, and you can persevere, they tell us. For humans, that foothold comes in the form of a nutrient that helps us persist no matter what shakes us: optimism. It allows us to let go of negative events and the lingering thoughts about them by shining a light on a path forward. It doesn’t end pain and prevent further setbacks, but the more you exercise your option to adjust to circumstances by taking a positive view, the more you broaden and build resiliency to life's slings and arrows, something we learn how to do in my stress management training and resiliency keynotes.

Most of us would assume that the essence of resilience was something more macho than optimism. It doesn’t feel “warrior” enough, but the research shows it most definitely is. When we can see past the mistake, setback, or reversal through a belief that the verdict is not final, that all is changeable and momentary, we are defeating our toughest enemy, the inner critic/doubter that wants to stamp every adversity with the mark of permanent failure.

It takes serious fighting ability to shut down the default to view a setback as calamity, which is what the false beliefs triggered by the stress response want you to buy. We can overcome, though, by using what’s known as optimistic explanatory style to vanquish negative events.

It’s an adaptive skill that allows us to reframe events away from the negative three Ps, as the University of Pennsylvania’s Martin Seligman calls them—taking things not as “permanent, pervasive, and personal,” which is our first instinct, but as temporary, specific, and non-personal, as one-time, one-off situations that don’t effect every facet of our lives.

Some lucky people come by this skill naturally, always finding a silver lining or having a bias for action that allows them to take steps immediately forward that get them out of rehash, rumination and dwelling on the setback. Yet anyone can fight off the trap of pessimistic framing and bunker mentality if they know how to challenge the stories in their heads.

Managing the stories we choose to buy or not in our brain determines everything—self-belief, confidence, spirit, vitality, defiance, resistance, persistence, internal validation, all the tools we need to overcome setbacks. Most of the time, though, the thoughts and their stories are managing us, instead of the other way around. We take the most ludicrous thoughts seriously—because they are in our head. They must be true.

REBOUNDING FROM THE ABYSS

No, there is a lot of flotsam and jetsam sloshing in and out of our heads without our cueing any of it. Automatic thoughts. Worries. Fears. False beliefs. Our mind has a mind of its own. Taming that mind and the nonsense it can dream up is a daily practice, choosing what to ignore, what to reflect on, what to reinterpret and frame. This latter piece is the foundation of resilience, in which we counter the worst-case mindset with the power of possibility.

Oz Sanchez was a 25-year-old Navy man riding his motorcycle in San Diego when a car ran a stop sign and sent him flying off a 12-foot embankment. He landed on his back on a pile of rocks. He suffered a spinal cord injury, just a few days before his wedding. In an instant all hopes for the future were obliterated.

He would be in a wheelchair the rest of his life. “It really took a toll on me,” Sanchez told me. “I went into a very dark area, depression.”

Perfectly understandable. What could be more defining as permanent than a spinal cord injury? Why go on? The blow seemed too hard to bear. Months and months he lay in a body cast. Feeling helpless was a new experience for Sanchez, who was a proactive personality by nature. His friends and family tried to encourage him, but it seemed bleak.

One day at the hospital, though, he saw a wheelchair with a hand-cycle used for racing. It touched off a curiosity, one of the most important ingredients in finding a new path forward. Could he do that, pedal with his hands and compete in a sport?

The idle thought turned into a goal to try, and the cracks in permanence began. He began to build his upper-body strength and endurance, empowering acts in themselves. After a year of training, he entered a 10K race and finished it. It was exhilarating not to feel helpless. He was back in touch with his core needs of autonomy and competence, which we all need to feel gratified. Sanchez learned that he was not permanently exiled from movement, life, and achievement. He could change things. 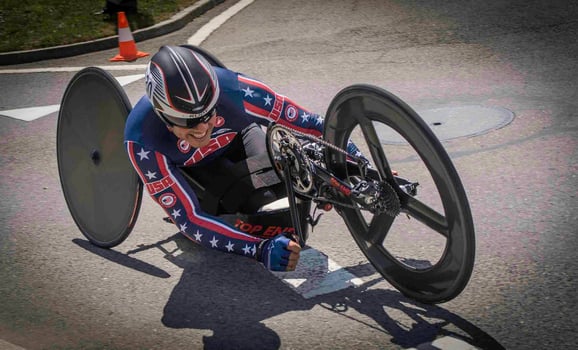 He would go on to become a multiple world champion in the sport of handcycling, and he won a gold and a silver medal at the Beijing Paralympic Games. Today, he is a renowned athlete and motivational speaker.

He is not alone in his comeback. Studies show that the majority of people who suffer spinal cord injuries go back to the well-being set-point they had before their accident. We are remarkably resilient.

THE COURSE OF COURAGE

The course Sanchez took was fueled by the courage to adapt, adjust, and imagine what-if. He got around the setback by not viewing it as an end to all aspects of life, to his self-definition, to potential achievements. Instead, he saw it as something that he had to work around and work with. His state and most importantly, the way he thought about his situation, was changeable, a key factor in optimistic explanatory style.

The story he wound up telling himself was not “woe is me,” or “why me?” He opted out of helplessness, a major driver of depression. He took a proactive course to physical training, learning a new skill, handcycling, and he also set a goal of getting his business degree, which he did. None of it would have been possible without Sanchez being able to reframe his story from a permanent catastrophe to a challenge he could surmount.

There is so much more in us than we ever tap, and it has the possibility to emerge when we rise to the challenge of setbacks and not allow them to define us. Negative events we experience and the emotions they set off in us are ephemeral. Only we can perpetuate them by clinging to them and bucking the nature of life: change. The adaptable species may not love to change, but embracing it is what life is all about—growth. That’s what our core, the brain, wants—progress.

Like the tree sprouting from granite, we can make our stand wherever we find a toehold, however small or cramped or exposed. Then we set a course for growth, rising above momentary emotions and circumstances no matter what the elements throw at us.

Take charge of the obstacles in your life or on your team. Click on the buttons below for details on my stress management training and resiliency keynotes.