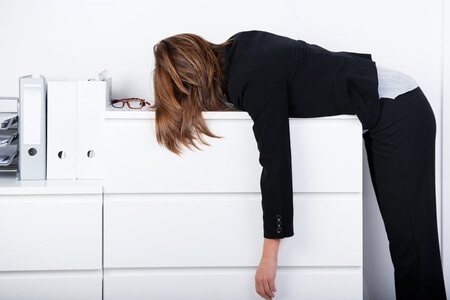 If it’s hard to focus these days, here’s a reason why. Estimates vary widely, but humans are simply drowning in thoughts—from 12,000 to 50,000 and 70,000 thoughts per day. It’s a wonder we can break through that babble for a moment of concentration on a single item from that cacophony.

It’s not like we’re deep thinkers, since most of the stuff is the same rehash from day to day, worries, projections, things to do, things to watch out for, threats on the horizon, things people said, things we’re fed up with, problems of the day, and ruminative loops that come from the false beliefs of stress. There are even a few good thoughts—curiosities, joyful musings, “man, that tasted good.”

YOUR BRAIN IS NOT A STORAGE CENTER

Into this noise comes even more static with the steady tonnage of information overload, email, texts, all prompting their own threads of thoughts to add to the pile. Is it any wonder that overwhelm, having more on our mental plate than we can process, has become the affliction of the modern era?

Most of the people I work with in my employee development programs, from work-life balance, to stress management or time management trainings are feeling overwhelmed by the sheer quantity of to-do’s and information and data taken in each day. It’s a natural response to a barrage our brains aren’t designed for.

The fact is the brain is not a storage center to be stuffed like a supercomputer. We don’t have Pentium processors. We are not hard drives with hair. The brain has limits that, once we become aware of them, can help us use our brain in the way it was intended, as a processing tool.

Working memory, also known as short-term memory, is one of these limitations. It’s the key to doing anything, whether in work or life, but it is highly restricted. You can’t hang on to more than three or four thought-chunks at a time for only a few seconds.

It’s very tenuous but also focusing, since you have to really concentrate in the moment to make it work. When interruptions bombard it, they blow up that fragile grouping of thought chunks needed to get something done. Then we have to try to reassemble the thoughts and where they were going. What was it I was going to do?

We’re not talking about multitasking here, which is a separate issue and even more limited. We can do only one cognitive task at a time, for instance, since there’s only one neural channel for language to go through. Working memory gathers thought associations needed to perform a single task, not multiple ones.

Another way your brain is constrained is in the number of events and to-do’s it can keep track of. Your brain is good at staying alive, eating, and avoiding harm’s way. That’s what it was designed for. It’s not built for keeping track of 30 appointments in your head. Trying to ignore that limitation is a big driver of overwhelm, as the to-do’s circle the mind and nag us, trying to get us to notice them. The longer those items remain unhandled, the more urgent the nags become, which drive a belief that things are out of control.

The key to managing overwhelm is to get the volume issue under control. It’s the number of incoming and still-unfinished items that trigger the danger button in the ancient brain that turns on the stress response because the quantity has overloaded perceived ability to cope with them all. We can make the stack of to-do’s manageable when we get all the floating, hectoring items out of our head and onto paper or a screen, along with a next physical action for each. Once that happens, the brain lets up on the badgering and hanging on to the to-do because it thinks you are on the way to handling things.

We need to clear space in the brain taken up by trying to keep many balls in the air for what it’s built for—analyzing data, working in the moment, innovating. We can unclutter a dump truck of space upstairs by setting the terms of engagement with the devices and interrupters that are blowing up working memory’s painstaking efforts to complete tasks at hand.

Researchers say that checking email at designated times is one of the best things we can do to rein in intrusions into our concentration. You turn your mail and phone off and turn it on manually at times you want to check. This way you are in charge, deciding when you want to deal with the business at hand, instead of being at the behest of the distractions. This lowers the intensity of volume concerns and makes things handleable.

Research at Oklahoma State University found that two to four times a day was the most productive email checking schedules. The University of California at Irvine’s Gloria Mark says three batching sessions a day, where you power through mail—but at your command—is the most effective.

TURNING DOWN THE VOLUME

Overwhelm is a byproduct of excess volume, pace, and load, all of which can be turned down by taking the time to plan, prioritize, and delegate, and strategically question. The latter is a willingness to identify bottlenecks, unrealistic deadlines, and other issues that drive overwhelm and then ask if there are more productive ways to do things. There always are, because the work style of first resort is all based on reflex and devoid of any productive basis.

Overwhelm is a menace to productivity, since it undermines the chief productivity tool, attention. Fractured, overbombarded attention is prone to rote and panicked decision-making, and defaults to System 1 thinking, the “fast” brain of impulse and jump-off-the-cliff decisions. The overwhelmed mind is also caught up in time frenzy, since it feels it is falling behind on everything. Time pressure makes the decisions worse, leading to crisis mentality.

There are research-based solutions to handling overwhelm, as along as we agree that it’s a problem and not a badge of courage. Being overconsumed with overperformance and busyness is not a good thing. It doesn’t speak to your endurance. It speaks to counterproductivity, because we wind up doing more than we can do well.

Overwhelm is also one of the quickest triggers of the stress response, because it’s the definition of something beyond coping resources. It can be the engine of a lot of physiological and emotional issues—hypertension, insomnia, irritable bowel, stroke, family dysfunction, burnout and depression.

Productivity is not a function of how many things you can do at one time or how fast you’re doing them. It’s about focused attention on one thing at a time. We get the job done faster and like what we’re doing more when we are fully absorbed in it. All we have to do is elude the thousands of extraneous thoughts sidetracking us and focus on the one right in front of us.

For details on our work-life balance, stress management, and productivity trainings, click the button below and learn how your team can manage demands and work more effectively.