How to Live Now, Not Later - Life Calling at Rio's Carnaval

TURN IT UP! The Sao Clemente samba school show at Carnaval 2017.

ONE OF BRAZIL'S TOP SAMBA composers, Arlindo Cruz, has a great song titled, “There’s Still Time to Be Happy.” It’s a reminder that it’s never too late to shift moods or circumstances, a point driven home in the most colossal way by Brazil’s annual Carnaval, a period of a week to two weeks where Brazilians switch off their myriad problems and work and turn to something that the research says is one of the best tonics for stress and negative emotions: the art of play.

As I watched Carnaval online over three nights of revelry in Sao Paulo and Rio, it struck me that we could all use a dose of the Brazilian talent for letting go. They know where both play and the joy that comes from it live—not in some future time when all your problems are solved or you have enough money. No, it’s right here, right now, when we can drop the reactions and projections that keep us mired in rumination and tenses we are not in and escape the life postponement rut.

"It's not that we have a short life, but that we waste a lot of it," wrote the Roman philosopher Seneca a couple thousand years ago, an observation that appears in a tiny but thoughtful book, On the Shortness of Life. "Putting things off is the biggest waste of life: it snatches away each day as it comes, and denies us the present by promising the future."

THE SWEET SPOT OF SAMBA

As some of you know, I’m a big fan of Brazilian music and culture. I'm pretty sure I was mistakenly switched at birth from a Brazilian mother. I lead a samba dance lesson at my keynote addresses, from work-life balance to motivation and happiness, and employee trainings, even for time management. It's a lesson in full engagement—and we always have a blast.

Happiness and samba go together, and one of the reasons is that both are usually participant affairs. Samba is “we” music, a collective experience that involves call-and-response singing and dancing in most of its many forms. It’s a music born out of life’s disappointments that stands on the neck of difficulties with powerful, uplifting melodies people share at get-togethers and barbecues.

Samba is also a cultural and social glue that bonds Brazilians, and particularly Brazilian neighborhoods, together. The big "samba schools" that perform in the blowout Carnaval in Rio de Janeiro are neighborhood associations, social clubs in the poor districts around Rio, where as one song puts it, you learn to laugh, samba, keep rhythm in a 300-piece band and march in crazy costumes with a cast of thousands.

The mind-blowing triple-tiered floats and spectacular costumes at Rio’s famed Carnaval are the byproducts of communities that don’t have much in material terms, but that turn their passion for samba and life into spectacles of art and imagination as sophisticated as anything dreamed up by Hollywood.

Carnaval in Brazil is the Super Bowl of life celebration, where everyone can participate, no matter your budget or walk of life. Researchers say participating in engaging experiences that satisfy core needs such as autonomy and connection with others, are key to happiness. And that puts Carnaval and people all over Brazil who indulge in their neighborhood bloco, or block party, the more informal celebrating that most Brazilians participate in, right in the sweet spot of life satisfaction.

So much so that I saw samba school members, even macho band directors, shedding tears of joy as they took their places at the beginning of their march on the avenue at the Sambadromo. Samba and the samba school is life. "It's in the blood," one legendary samba singer, Monarco, once told me.

That goes for fans watching in the stands and even on TV as well. Once the drummers start booming, you are no longer apart from life, but part of it. That’s the idea of joy, dropping the force field around us and allowing ourselves to be touched by something and feel it deeply. It tends to be something that happens with others, just like fun.

On the last night of parades of the top samba schools in Rio, I found my favorite, Sao Clemente, which was second out of the gates. Their 3,000 members used their deliriously catchy theme song to crowdsource joy into a force so awesome I couldn't stop smiling for the whole hour-plus they marched at the Sambadromo. And I haven't been able to stop playing the video of their performance over and over. Feel it yourself and supercharge your day with the group's entire show above or on video here.

Sao Clemente is not one of the traditional champions of what’s known as the Special Group of samba schools, such as Mangueira and Beija-Flor, known for their artistic extravaganzas and righteous baterias, or drum sections, but it rose above all the other schools this year in collective joy, powered by its infectious samba-enredo, the high-octane samba song created just for Carnaval. 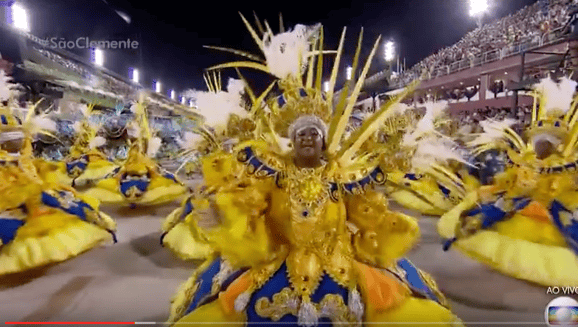 Each samba school debuts a song each year for the event that tells the story or theme of their show, which the percussion orchestra thunders to life. They and the featured vocalists and all parade participants sing that samba for the full hour and 15 minutes as they parade, dance, and shake past the grandstands and judges at the Sambadromo. It's endurance joy in the wee hours of the morning, and no one runs out of spirit. It's the culmination of months of practice to hone the music, the rhythm arrangements, choreography, and the various roles the marchers will play.

I’ve been to a few samba school rehearsals in the poorer neighborhoods of Rio, and the experience is boggling. You don’t just hear the music, you feel the locomotive engine of the drums in your kidneys. It tells you that, yes, there’s another of level of elation out there when we dig deeper into our affinities.

I got hooked on the ecstatic chorus of Sao Clemente's samba, sung in unison by thousands of passionate Sao Clemente participants and fans in the stands. It was especially powerful when the instruments paused and those rousing voices filled the night air with their hearts and souls. That is the definition of sheer joy for me.

With the hyper-strummed strings of the mandolin-like cavaquinho and throbbing surdo bass drums driving them onward, the grandmother wing of the school, known as Baianas, had an extra bounce in their step as they twirled their enormous dresses like whirling dervishes. Ordinary folks dressed in finery of the French Renaissance—the theme of the show was the French Sun King and arts patron Louis XIV—raised arms to the heavens.

The strategically sequined passistas, the showgirl-style dancers, kicked into the fastest dance steps on the planet, doing their speed samba in teetering heels. All ages, all races had opted out of preoccupations to immerse for a special time in their lives in unadulterated joy.

OUR APPOINTMENT WITH LIFE

University of North Carolina researcher Barbara Fredrickson has found that positive emotions like joy broaden and build us. We become more resilient in the face of setbacks and open our minds to new experiences, something our brain neurons crave. Other researchers have found that singers performing in a chorus had higher levels of a protein that strengthen the immune system. You bet, singing and dancing is good for you.

Sure, Carnaval participants go back to their lives and their problems after the show—Brazil has a lot of them these days, with the worst economic crisis in a century—but many of its citizens will have gotten in the kind of peak life moments many of us are missing out on and that help cushion setbacks ahead.

The reality of emotions is that the negative stick around longer than the positive ones and, as a result, are great at keeping us distracted from what we're supposedly working for—life. Our survival instinct is set to a default to obsess about what's wrong. It makes it seem like things are worse than they are. Researchers say that we have many more neutral to positive emotions in the day, but we don't remember them, only the negative.

Happiness, joy, and elation don't last nearly as long as we'd like. That's okay. Positive emotions operate on a different dynamic. Even though they are shorter in duration, having a steady dose of various positive events can crowd out the negative.

Joy is not a special event that happens a couple times in life or can only be indulged in when we "deserve" it. One of the fallacies I see too much is a belief that you have to work till the threshhold of pain before you are entitled to step back and enjoy life. No, you are entitled to live now, and when you do, your work will be more energized for it, as I wrote in my last blog, on vitality.

HOW TO ADD 8 HOURS OF JOY PER WEEK

We can access joy whenever we want by leaving behind worries the mind clings to and diving in to recreational experiences that put us in touch with things we love to do, like samba for me, for instance, things that make us happy by the act of being in the experience and not for some instrumental goal that we may get out of it. It’s the demand that everything pay off for us externally that keeps us from enjoying our lives, says a consensus of scientists around the world. What brings joy doesn’t come from the external payoff side—money, success, status.

It comes from experiences we do for their own sake, not what anyone else thinks. Research at the University of Montreal shows that, if you have a passion, you can add eight hours of joy to your week.

Play is like a muscle. When we do more of it, it’s easier to access it and escape moods that keep us in a bunker. If we haven’t played in ages, it’s very difficult to dig the spirit out, and this is one of the problems most adults have. We lose the skills of spontaneity and surrender to what’s in front of us. Try using the video above of Sao Clemente as your motivator and reminder to put life on the calendar.

The drummers, dancers, and fans at the Sambadromo have gone home now. The party always ends. I'm still pumped, though, with the spirit of samba, which is as near as the Sao Clemente video or the rest of my samba and music collection.

Pure joy and fun is contagious. Sao Clemente's vivacious samba song was voted best of the 2017 Carnaval by experts on a jury panel of the event's broadcaster, Globo. Click on the video, turn up the volume, and catch the spirit! These are the best times of your life.

If you would like more details on a keynote address on work-life balance, happiness, or motivation, or spreading fun with a samba lesson for your audience, click on the button below.