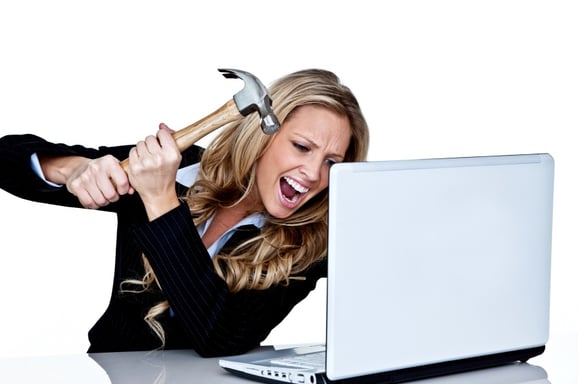 It would be so much easier to be a Vulcan. Pure logic, no emotion or egos to get in the way at work. Pressure? What pressure? We could handle it all with the serene nonchalantness of Mr. Spock.

No taking things personally. That would be illogical. No obsessing about yesterday's woes or what had to be done tomorrow. That was/would be then. The only tense we can rationally be in is the present. And if we couldn’t get on the same page with somebody, we could just do a Vulcan mind meld. Now I see what you’re thinking.

Sure, it would be a little dull, if not a crashing bore, but at least we wouldn’t have stress to worry about, because we wouldn’t have the bane and also boon of human existence, emotions, to get in our way. It’s our reactions to the events of the day and the emotions they set off that create, produce, and direct the stress script.

The fallout from stress on any team or organization is so massive—from retention (40% of people who quit their jobs cite stress as the main reason) to profits (23% higher when stress is managed)—that it would be illogical to not have ways to counter it.

The good news is that organizations don’t have to be a breeding ground for unmanaged reactions. You can manage demands and control emotional responses. That's what we teach here at Optimal Performance Strategies in our stress management training programs and classes.

Very few of us are ever equipped with the skill of managing our default emotional reactions. It’s like never being told that we had to brush our teeth to fight off cavities. Just let ‘em rot.

Managing emotions is that basic to healthy brains and behavior. It's a daily practice we have to do, or wind up with a lot worse problems than cavities.

We are born with a mind that is easily hijacked by irrational emotions when it believes something has overloaded ability to cope, which happens often in a world of social stress that an outmoded portion of the brain has no idea how to deal with.

The tide of dysfunction set off by the stress response is a tsunami that can overtake any team or organization with fight-or-flight behaviors. Suddenly, everyone is snapping at each other. Stress is highly contagious, spreading secondhand stress through what are known as mirror neurons, which make us simulate the emotions and expressions of others.

We pick up on the emotions of others through facial expressions and tone of voice. Mirror neurons are a social bonding tool. Positive emotions can sweep people up in a buoyant mood that is infectious and that research shows results in increased productivity and rapport, but stress and cynicism bury everyone in a toxic quagmire of anxiety.

Negative emotions are more powerful than positive ones. It takes three positive to every one negative event to stay on the positive side, according to University of North Carolina researcher Barbara Fredrickson. Studies show that negative affect drives down productivity, sales, and rapport for those caught up in it.

The key to managing emotions is managing reactions. That’s because it’s the reaction, or the story we tell ourselves about what somebody said or a project that didn’t go well, that sets off the stress response and a wave of raw emotions unhinged from the rational higher brain. The ancient limbic system takes over at this point, flooding our brains with irrational emotions—fear, anger, embarrassment—and the all-or-nothing, catastrophic thoughts that come from them.

The reaction usually goes off unconsciously, as the early warning system, the amygdala, detects within milliseconds a perception that something has overloaded coping capacity. When that happens, it triggers an intense emotional reaction, since a part of your brain thinks you are about to be deceased.

As a result, the thinking is dire, catastrophic, black-and-white. It’s hard to resist grabbing these strong emotions and thoughts because they are in our brain after all, so they must be true. Well, no. They are false beliefs. You are not going to die. The alarm and reaction itself are bogus.

This is where we make our stand against repeated mind hijackings, by not automatically reacting and becoming aware when we do go off and cutting off the stress response before its false beliefs are allowed to spiral and entrench in the brain. We have to do something we’re never told to do: contest the stress. That means challenging the false story behind the alarmist thoughts and becoming resilient in the face of challenges.

Often, we don’t know what that bogus story is. We simply get sucked under by the real-seeming catastrophe and fan the emotional flames by ruminating about irrational reactions like these:

Focus on irrational thoughts constricts the brain to the perceived crisis, shredding attention and driving mistakes and conflict. It can put teams, clients, patients, and organizations at high risk to have people in the altered state of stress-driven emotional reactions.

In our stress management programs at Optimal Performance, we train participants to recalibrate reactions and reframe the false stories that drive the emotional machinery behind stress. Studies show that we can prime our brains to respond to habitual triggers with new behaviors.

We can manage demands and emotional intensity. We can turnr reflex reactions into responses that keep emotional surges at bay and bring back the 21st century brain—and the voice of reason, our very own inner Mr. Spock.

If you would like to find out more about how to train your team or organization to manage emotions and reactions, click the button below for details. Or give us a call at 310-570-6987.