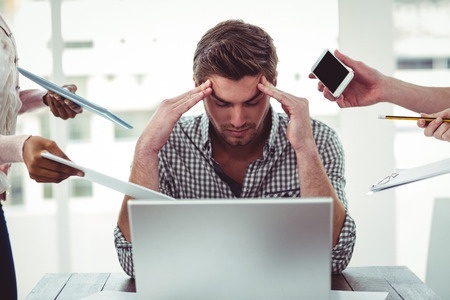 HUMANS HAVE an unfortunate knack for getting in our own way. We tend to specialize in unforced errors—false beliefs, delusions, and habits that undercut the indispensable tool that keeps us from self-inflicting more sabotage: impulse control.

More and more of us are losing it, and with it, the ability to regulate impulsivity, which means we are also losing the discipline to stay on task, avoid temptations, manage stress, and even process thoughts while sleeping.

It used to be that impulse control issues were confined to children and adults with psychiatric conditions or substance abuse, but these days it’s infecting a whole bunch of us, thanks to the siege of unbounded devices and interruptions. The more interruptions you have, the more a part of your executive attention function that regulates impulse control, known as effortful control, is eroded.

In other words, the more we check email or Facebook posts, the more we have to check them. You can see the impulse control deficit everywhere—from colleagues who don’t hear a word you’re saying because they are glued to their phones, to family members AWOL on devices at the dinner table, to oblivious text walkers blithely walking against a red light, to what I saw recently at the gym. Every single person in view was staring at their phones, some trying to do exercises on the machines while holding onto the sacred device with one hand. It’s like mass hypnosis, Invasion of the Mind Snatchers.

And speaking of snatched minds, researchers say that, if you default to your device every spare moment, when you sleep at night, you won’t have any thoughts to process. Sleep helps us find patterns and solutions to problems, but the catch is you have to have thoughts in your head during the day to have anything to process at night. Device reflex preempts the thinking and musing needed process events.

Digital and mobile devices are wonderful tools, but there is a price for abusing them. Researchers like Gayle Porter of Rutgers have found that technology is as addicting as any substance. After all, what is the definition of addiction? It’s the inability to regulate impulsivity—and an obsessive compulsion to engage over and over in an activity of instant gratification. Sound familiar?

The study discovered that mobile technology habits, “such as frequent checking, are driven most strongly by uncontrolled impulses and not by the desire to pursue rewards.” Compulsive device use, then, isn’t triggered as much by the positive reinforcement of an email response, but by an irresistible urge—due to impulse control malfunction.

Impulse control is central to attention, our chief productivity tool. As self-regulation capacity is reduced, so is the attention span. This creates a constant need to shift to the next quick escape/stimulation and away from anything that requires effort and discipline.

The result is high distractibility, multitasking, impatience and flitting from one thing to the next in a pattern known as Attention Deficit Trait. It’s not a condition you are born with, such as Attention Deficit Disorder; it’s a byproduct of information overload and interruptions that overwhelm the brain’s attentional faculties and wind up mimicking that condition.

When impulse control is compromised, it doesn’t just affect email checking. It undermines ability to regulate any habit you may have, whether it’s Jim Beam, chocolate, or outbursts of anger. The habit formation cells in the brain actually grow larger and the goal centers shrink.

Paying attention is all about a goal. You want to do something, learn something, experience something, but you can’t do it unless you marshal your self-regulation equipment to hold off all the distractions while you focus. That takes effort and effort takes impulse control, more of it than you might even imagine.

This is because all the tasks we do every day are dependent on a very fragile tool: working memory. Also known as short-term memory, working memory is the faculty we use to get anything done. It’s a maximum of three to four thought chunks that we can hang on to for only a handful of seconds. Without a functioning impulse control mechanism, it’s very hard to keep those thoughts together. Impulsive phone and email checking and interruptions blow up working memory as they detonate attention and effort.

THE SIREN OF INSTANT GRATIFICATION

It’s not only working memory that is at risk, though, when impulse control systems are down. There are more than 1.3 million car accidents every year caused by people on their phones while driving. Research shows the dynamic behind those tragedies—people who engage in impulsive behavior are less apt to delay actions for a later reward (Hayashi, Russ, Wirth, 2015).

Without impulse control, instant gratification is the guiding instinct. As the word “instant” implies, there is no real thinking here, only reflex. That effectively eliminates rational decision-making. It leads to what Nobel-prize winning researcher Daniel Kahneman calls “System 1” thinking—impulsive, shallow, jump-off-the-cliff, last thing in the memory. And it’s wrong a lot of the time.

Time pressure and rushing, another habitual behavior in the workplace egged on by the unmanaged use of devices, also cause a loss of impulse control. Instead of analyzing the situation, brains skip analysis and leap headlong into rash decisions.

Most of the rushing today is false urgency. Everything appears urgent when we haven’t taken the time to think about what is urgent and what isn’t. It’s important to counter rush mode with “System 2” thinking, which Kahneman calls “slow thinking,” which allows the analytical brain to weigh all the factors before a decision. Is it an emergency or a speed trap?

Without impulse control, we are at the mercy of our emotional reactions to events, which drives stress. The data show that interruptions make every task you do seem more difficult by jacking up the aggravation load 105% (Bailey, Konstan).

Preserving impulse control is essential, then, to avoid destructive decisions and habits, protect working memory, and reduce stress and burnout. How do we do that? The humans have to be in charge of the devices, instead of the other way around. Information management is key. Turn off email and cell phones and check them at designated times. Create an Email Etiquette and Norms Guide, something I help develop in trainings for my work-life balance, stress management, and time management clients. That puts you in control.

Stop multitasking, another habit that blitzes self-regulation and drives impulsivity. Increase attention through activities shown to build focus in the prefrontal cortex—mindfulness, chess, learning a language or instrument, and spend more time in nature, which takes attenton off anxieties and increases positive mood.

Substitute a good habit for a bad one. Every time impulse strikes, stop yourself and practice delayed gratification. You'll get to it when you are not in your car, after other priorities are taken care of, when you, not your inner saboteur, are in charge.

For details on how our work-life balance, stress management, and time management employee training can help restore impulse control, cut stress, and build productivity on your team, click the button below: