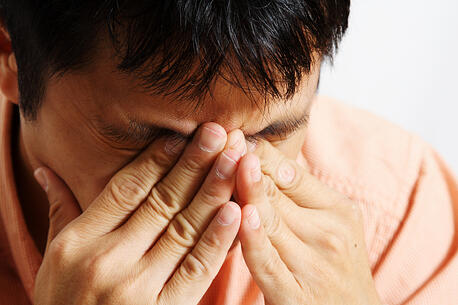 When I lead work-life balance programs for organizations across the country, I invariably meet folks who take me aside to tick off a litany of meds and health conditions — all due to something that is highly preventable: chronic stress.

A manager at an aviation company told me about the heart attack he'd had five months earlier. A woman at a drug company in the prime of her life listed seven meds she was on, for everything from depression to insomnia. I met a woman in her twenties at a government agency who had the ailments of a 70-year-old.

It's tragic, and none of these health issues had to happen if the individuals knew how to manage stress and communicate about it, and if the organizations knew how costly it was to their bottom lines, so it was permissable to resolve it when it popped up. Health costs for employees with high stress are almost 50% higher. Unmanaged stress costs employers $5,000 per employee.

Yet the cost of a stress management or work-life balance program for the whole staff is less than the stress costs for one employee. The hurdle is getting around the taboo about talking about the issue. If the condition were the flu or a knee injury, it could be shouted from the rafters, but stress, which is many times more dangerous than those conditions, feels like a personal failing or a not sufficiently rugged individual. The reality is that the people most susceptible to burnout, the last stage of chronic stress, are the hardest workers.

When we don't talk about stress, that actually inflames the catastrophic thoughts behind it because then we think about it and ruminate. Rumination leads to locking in the false beliefs of the stress response.

The result: lost health, money, productivity, and sometimes lives. More than three-quarters of the 956 million visits to physicians every year are estimated to be the result of stress-related problems. Job-related stress costs American business more than $400 billion a year, according to U. C. Irvine researcher Peter Schnall. Chronic stress kills more people every year than traffic accidents, nicotine, or alcohol yet we hear next to nothing about it —no anti-stress ad campaigns like the anti-smoking spots.

A massive stress education program could go a long way toward addressing the problem and letting everyone know that we hold the key to creating stress or dumping it. Yes, there are plenty of demands in a warp factor 9 workplace, but it's not the deadline, what a customer says, or the conflict with a colleague that's causing your stress. It's the story you tell yourself about the negative event or the stressor that's causing the stress. We all have the ability to change the stories that create our stress, if we know how the dynamic works.

The problem is a design flaw in our brains that leaves us prone to false emergencies. We were made for life-and-death struggles on African savannas, not overflowing in-boxes or sales quotas. That's especially true for the part of your brain that sets off the stress response, the amygdala, a hub of the emotional brain, the ancient limbic system, which ran operations before we evolved the higher brain organs that can make decisions based on reason and analysis, not raw emotion.

In times of perceived danger the amygdala hijacks the 21st century brain and takes the helm again. This ancient alarm system is as good at measuring threats in the workplace as a yardstick is at calculating the distance to the sun. A hundred and fifty emails a day is a hassle, but it's not life-or-death. But if an overloaded inbox makes you feel you can't cope, off goes the signal that sets off the stress response, which floods your body with hormones that suppress your immune system to help you fight or run ... away from your computer?

Researchers have discovered that there are a couple of keys to controlling the stress response (which can be shut off in four minutes, as soon as the brain can see the danger is over): increasing "latitude," the amount of control you have in your work — possible through changes in how you do your tasks — and the story you tell yourself about the problem.

The first story we get when the stress response goes off is supplied by the caveman brain, the amygdala. Since it thinks those 150 emails will overload our coping ability, it interprets the matter as life-and-death, unleashing the stress response and the panicked thoughts that come with it. The initial thoughts of a panicked brain are exaggerated. We get swept away by a surge of emotion from these distortions, buy the false beliefs, and go down the irrational track, causing any number of consequences, all based on a fantasy.

Stress constricts the brain to the perceived crisis and inhibits things that can reduce the stress, such as relaxation and recreation. Stress shuts off diversions, leaving us to obsess about the perceived emergency.

We're never taught to speak up about stress, or to contest the distorted beliefs of stress, so the catastrophic stories stick. If we don't dispute them with the 21st century brain, the stress response spirals in intensity, locking in a false crisis mentality. Since the process suppresses the immune system, we become vulnerable to any number of health problems — adrenal dysfunction, back pain, chronic fatigue syndrome, hypertension.

The biochemical changes increase the bad cholesterol and decrease the good kind. The stress response steals from various body systems to pump more blood to your arms and legs to fight and run. It was intended to last for the minutes or perhaps hours it took to get out of harm's way, not to pump 24/7, day after day, month after month, as it does with modern, chronic stress.

We can exit the stress trap by identifying the triggers, getting it out into the open by speaking about it with a supervisor or family member, by increasing control over the work environment through adjustments that make us less stressed, and by changing the false story of the caveman brain to one based on the facts of the situation.

There are a number of great techniques that reframe the stress story and reduce the anxiety. Some processes, which involve deep breathing and reframing, are good for situational stress. They let you step back when the going gets tense and create counter-stories that can stop the stress spiral in its early stages, before the catastrophic thoughts become entrenched. The stress spiral is weakest at the very beginning of the cycle, so that's when you want to contest it.

It takes time and effort to change reflex behaviors, but we can learn to reframe stressful situations. We can build in the thinking and catch ourselves before we rush headlong down the irrational track. But it all starts with a refusal to take stress and a commitment to speak up, and for organizations, a proactive approach to rooting out this talent and productivity killer.

If you'd like more information on how to keep stress at bay for your company or yourself, click one of the buttons below for information on my stress management and work-life balance programs.