Don't Take the Bait of Panic, Stress, and Catastrophic Thoughts 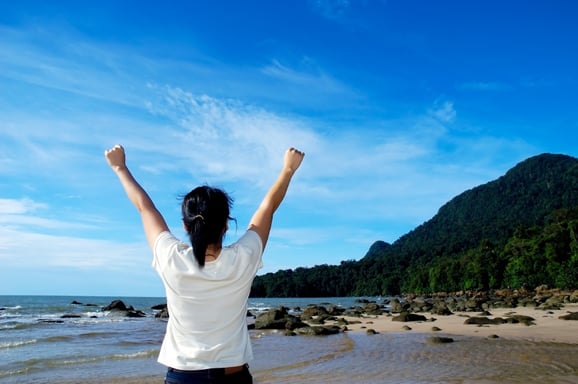 You turn your wallet upside down, but can’t find it. Your credit card is AWOL. Immediately, the heart rate quickens and thoughts careen to catastrophes. Is someone running up a huge tab at the local jewelry store? Is your identity being stolen?

Or maybe you just got rejected on a critical sale, one you had told your team was in the bag. The self-talk goes to crazyland. You’re going to lose your job. You’ll be on the street. If you want proof that everyone has a creative side, just look at the worst-case scenarios we all have concocted under the influence of stress and panic. Who needs Stephen King or Wes Craven when we can tap in to the wildest horror movies inside our head?

LUCID TO UNHINGED IN A SECOND

Panic. We can go from zero to 10 on the freakout scale in a second. In an instant, ability to think clearly and use the intellect to solve a problem is blown up by irrational fear and hysteria. Panic is the last thing you want to do in moments like these, so why would evolution select out this over-the-top counterproductive habit?

It's a mistake, just like the stress response is when it goes off and your life is not on the line. Bad gray-matter architecture puts the ancient, emotional brain in charge in times of perceived threat, thereby making us prone to fly off into unhinged territory when something overloads coping resources.

As we discover in my stress management training programs, learning how to manage the panic button and the stress it sets off is a crucial skill we all need. Life is, in essence, a battle to keep the fear down, to not fall for the calamitous alarms of our overwrought security equipment.

Defaulting to hysteria in a difficult moment, not only makes the situation worse, the job worse, the relationship worse, it also is a reaction that is obsolete, built for another time and place 200,000 years ago.

Panic is a sudden shock to the system that jolts all stress response mechanisms into immediate gear for two purposes, neither of which has to do with thinking: 1) fight or 2) flight. Back before humans had the brain organs or ability to weigh pro and con and analyze a potential threat, all we had was the limbic system, the emotional brain, to respond to threats to life and limb.

Early humans couldn’t be trusted to think their way out of a potential mortal jam, so the brain was designed to respond with panic, instead, which would result in either a sprint out of harm’s way or standing ground and battling it out with a caveman stranger or saber-tooth tiger. Panic supercharges the body’s defense system that pushes blood to the arms or legs to survive dangerous encounters.

The problem is that panic doesn’t work in a world of social stressors, where clarity of thought is needed to solve problems and the threats aren’t life-or-death. The problem is that, even though we have a modern, analytical brain today, we're stuck with the panic response, because stress hijacks the 21st-century faculties of the cerebral cortex and puts the irrational, limbic dolt in charge.

It doesn’t make sense today to run a mile and hide in some bushes when a problem arises, or to deck the first person you see when the 200th email of the day has hit your box and pushes the overload button.

Panic is an errant stowaway from another epoch that does more harm than good by setting off false alarms that drive catastrophizing, chronic stress, and projected fears that feed thoughts with pure fantasy. We make poor choices, lash out, get in car accidents, because we are not thinking, only acting.

One of the hidden keys to a less stressful and happier life is managing the panic reflex. Don't buy the first disastrous thoughts in your head after something goes wrong. How often have those imagined catastrophes come true? Don’t panic. Process. That’s what the brain is for. It’s a processing center, weighing the facts before a conclusion. Panic removes the modern brain from the equation. We have to prevent that from happening.

Getting it under control means managing reactions. It’s not what someone does or says to you that causes the panic of the stress response to go off; it’s your reaction to those things.

Thoughts triggered by our reactions to setbacks drive the whole stress train. They are false beliefs, since the ancient brain hijacks your modern gray matter with visions that are exaggerated, distorted fiction. The longer panicked thoughts aren’t disputed, the more they entrench in the brain and appear real. Just because thoughts are in our head doesn’t mean they are real. Thoughts aren’t real. Only experience is real.

Panic is triggered by reflex emotional reactions. To manage it, we have to become experts in nonreaction. That means training ourselves not to go off when difficulties arise or catching ourselves when panic strikes.

DON'T FALL FOR THE HARE-BRAIN

We have to learn not to take the bait of stress and fear. Panic and the stress alarms of our ancient brain are cons. They can’t operate without our cooperation. We set ourselves up when we let things push our buttons, and we fall for hare-brained visions of calamity.

When something triggers panic, a racing heartbeat, and thoughts of doom, we need to step back, take a series of deep breaths for a couple of minutes and repeat out loud, “I don’t react.” That brings back the 21st-century brain from the clutches of hysteria. It restores power to you as well as rational thought, and those two work together as your natural smelling salt. The longer a stressor is not disputed and resolved, the more its false catastrophes spiral.

That leads to awfulizing and rumination, or obsessive replay of the event or the fears from it, which turn false beliefs into seeming reality, so it’s crucial to get thoughts out of your brain and on paper or a screen.

Make a list of catastrophic thoughts. How true are they? Now lay out the facts for the most likely story of what’s taking place. Bringing out the facts of the situation and analyzing them restores command to the modern brain. Now tell yourself a new story that reflects your situation and abilities going forward. Say, “Yes, I lost this sale,” or “I’ve got a lot on my plate,” “but I can handle it.”

How we explain why bad things happen to us is crucial, not just to keep panic at bay, but also to create an “explanatory style,” as researchers call it, that promotes an optimistic outlook. Studies have shown that people who use self-talk that frames events in a more optimistic and passing way, as temporary and not permanent, for instance, have fewer major medical issues earlier in adulthood and lead more successful and happier lives.

The counter to stress triggers and the panic that can set them off is control. The more perceived control you have over a given situation, the less stress. Panic is the state of having no control.

That’s a lie. You do have control. You have a choice in how you respond to the situation. You have imagination to create solutions to challenging scenarios.

And you have resilience. You overcome thousands of challenges in the course of your time here. It’s what we do. There’s no need to panic, because we’ve always gotten through it, and panicking wasn’t even one iota helpful in doing so.

The urge to freak out when setbacks occur is an obsolete reflex we no longer need to survive on this planet. The outlandish, catastrophic thoughts that come from panic are for naught. It’s just the roller coaster of life. What can go wrong will. Accidents happen. And we can think before we react.