Be Quick But Don't Hurry: Speed Kills Productivity and People 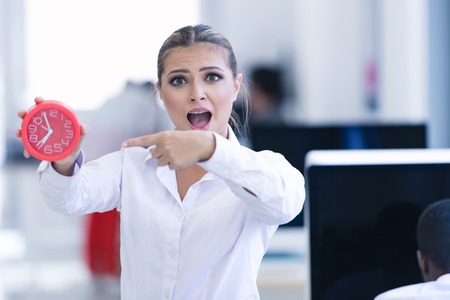 IF THERE'S ONE little adjustment that could make a giant difference in work-life balance and job satisfaction this year, I would vote for an end to hurry-worry. I’m talking about that hyperventilating habit of rushing through every minute of the day at work—and at home—as if you were a stampeding wildebeest.

We’re all on a speedway these days, one driven by a fallacy that “as fast as you can” is the goal, when mindless rushing is the foundation for much of what ails brains, teams, and productive endeavor. It drives frenzy, frazzle, false urgency, crisis mentality, stress, burnout, and a host of pointless mistakes that happen when the brain in hijacked by an ancient interloper that believes every minute of the day is an emergency.

Nonstop motion makes everything appear urgent when we haven’t taken the time to think about what is urgent and what isn’t. Speed for speed’s sake is the wrong goal, unless you like the churning stomach, temper tantrums, and mistakes of false urgency.

Autopilot mechanical momentum, minus thought, undermines productivity. We need informed performance—mobility, having our faculties functioning while we focus on the task at hand, not the clock.

It’s not a sprint to the death we’re on; it's a marathon. That means we have to move with deliberate speed, and for that we need the capacity to think and focus, which isn’t there when rushing.

The great basketball coaching legend, UCLA's John Wooden, had the best description of how we should approach a swift result. He said, “Be quick but don’t hurry.” It’s a brilliant principle for any organization or individual. Yes, you want to move at a good pace but not at one that mars your thinking, which is what hurrying does. In my time management and work-life balance programs, we focus on quickness and qualifying urgency.

On the basketball court, hurrying triggers forced shots, turnovers, and charging fouls, because it sets off stress-addled emotions. Being quick, though, means you move swiftly but under control. We are not under control when we’re in hurry-worry mode. The ancient part of the brain that thinks you’re going to die unless you race all day sets off the stress response and the catastrophic, shallow, and rash thinking that accompanies it.

Time urgency used to be restricted to Type A personalities and the super-important deadline. These days, thanks to technology, shorter attention spans, and the endangered species of patience, we’re all caught up in it.

All Type A’s are stuck with time urgency, which is a fixation with the passage of time and a compulsion that every second of the day should be jammed with as much production as possible. That goes for when you’re at home too, so time frenzy is very insidious. It wants to book up all your time outside the office too, which kills work-life balance. How do you get any recharging in when you have to fill every moment with production? We need to stop filling time and make our off-hours more fulfilling.

Rushing kicks thoughts from the top floors of the brain to the rote and panicked floors, which accounts for the rash emails, the impulsive decisions, and the shift from thoughtful analysis of the next move to frenzy and nonstop commotion, which isn’t forward motion.

SPRINT TO THE DEATH

There's a reason why we have laws to prevent speeding on highways and railways. Nobody would want a surgeon trying to set a speed record for brain surgery slicing into their skulls.

Researchers have found that rushing is bad for your work, health, and life. Managerial activities that require complex decision-making and long-term future planning are hindered by time urgency (Abbott, Sutherland). Time frenzy is also a heart attack risk (Cole). The pattern goes like this: Impatience leads to irritability, which leads to anger, which leads to clogged arteries. Time urgency can also lead to burnout and emotional exhaustion (Conte).

Exhaustion is a common side effect of hurry-worry, because implicit in the behavior is a false belief that you have to get something done faster or get somewhere speedier than is possible. One eye is always on the long list of things to do after you race through the current task. So there’s a futility in reflex rushing, a frustration with yourself and others that you can never do it fast enough.

The thing about time urgency, though, is that most of it is self-inflicted. We create arbitrary self-deadlines. I’m going to get this done by 12. I’m doing to do this in 10 minutes. People with time frenzy, and especially Type A’s, always overestimate their ability to get things done quicker than the reality dictates. We often box ourselves in with these overestimates of our speediness by telling others that, sure, we can get that done by some super-fast, unrealistic deadline. Always build in extra time, scope creep, to keep yourself from overpromising and underdelivering.

TURNING OFF THE RACETRACK MIND

Awareness of this habit is the first step to curing it. Since time frenzy turns on the stress response, you are going to know when you’re rushing for nothing by the stress symptoms that appear in your body—racing stomach, tightening in the neck, rapid heartbeat, digestion issues, insomnia. When you feel these cues going off, step back and ask, What is the emergency?

Turning off the racetrack mind of hurry-worry restores focus in the moment and takes fixation off the clock and to-do list so that we can harness attention for the task at hand. Not taking the rushing bait allows you to feel in control of events, instead of at the mercy of a world out of control. That allows you to manage demands instead of having them manage you.

And, what might be the most important thing about dumping this habit, you have permission in your life outside the job to enjoy hobbies, do exercise, and live life without the nagging that you should be doing something productive every spare second. That is the real measuring stick in our later years, so you're going to feel productive and satisfied if you can look back and see a life fully lived.

If you and your team would like to get time urgency and management under control, click the button below for details on our stress management, time management, and work-life balance programs.