The Call of Risk: Fear Is Momentary, Regret Is Forever 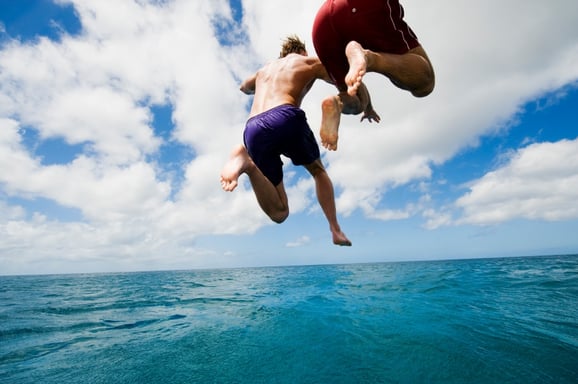 If fear was gold, we’d all be millionaires. Unfortunately, the payoff is mostly less than zero for this ancient and epidemic human emotion. In the epic battle in your brain between the forces of safety and growth, the comfort zone usually wins, keeping at bay a skill essential to the full expression of your non-work life: risk-taking.

You’d never know it in a world of alarmists and nay-sayers, but we weren’t built to play it safe. The biochemistry is designed for the exact opposite, to go where we haven’t gone before.

Risk is the central piece of forward progress—and the life satisfaction that springs from it. Without managing fears we can’t satisfy the mandate of our brain neurons for novelty and challenge, the keys to growth and long-term life fulfillment, say brain researchers, not to mention avoiding the regrets that rush in when fear squelches our progress.

Without risk, we can’t gratify core psychological needs that require that we step off the moving sidewalk and chart the path we're here for.

Fear is the power of what doesn't exist to control what does. It has the upper hand most of the time, thanks to an itchy security trigger from our days back on the savanna and our habit of not disputing the emotional backwash in our brains. If it’s in my head, it’s gotta be true. The research shows we can outfox fear’s vise-grip on risk by modifying our behavior and thoughts and changing the terms of risk evaluation.

What risks has fear overruled for you? Maybe a trip someone convinced you wasn’t safe, an activity you didn’t want to look like a fool doing?Looking back, you’d make a different choice, because, with time you see that the “fears” were false, momentary blips of projected anxiety that stepped on your life.

Fear is momentary; regrets are forever. The reality is that fears that paralyze us today will be long forgotten tomorrow, and we’ll be left with the after-effects — life unexperienced, progress unmade, a truckful of regret. All because of irrational neuron burps in your brain. For nothing, in other words.

It’s the opportunities we don’t act on that cause the most regret, say researchers, known as “the inaction effect.” Instead of looking back years later at what we wished we would have done, why not look back now in the moment of risk, and use regret to transcend autopilot fears?

Regret is a built-in insurance policy to make sure we don’t leave too much life on the table. It forces us to see the big picture fear obscures. Think how mad you’re going to be later that projections in your brain of things that don’t exist kept you from the life you could have lived. Instead, let the prospect of future regret fortify your courage to act now.

We pay for the safety default with boredom and stir-craziness, items born of something built into the DNA — adaptation. We’re made to get tired of reruns. This anti-rut device is designed to make us change things up. Core psychological needs, such as autonomy and competence, can only be satisfied when you demonstrate your capacity to take on new things

We can improve risk-taking ability by changing attitude, increasing competence and through a process of reframing fears called fear extinction. Researchers have found that people in a positive frame of mind tend to see risk as an opportunity, not a threat. Stress management is key, since stress keeps your brain constricted to the perceived crisis of the moment, i.e., negativity. Intrinsic goals are another way to disarm fear. Acting for the sake of the experience itself removes the expectations that give us pause.

Risk is about managing uncertainty. The more that uncertainty is managed, and the more you feel competent to handle the risk, the easier it is to step forward, instead of back. Competence makes you see potential benefits, instead of threats, say researchers.

Fears can also be weakened by exposure to threatening stimuli. You can change fearful images by altering your memory of them. Each time you recall a memory and add or subtract from it, you are defanging the initial fear.

More of us could take the risks we need by changing the equation from potential loss to gain. Try viewing the unknown, not as a threat, but as exploring, exactly what your brain neurons want you to do.

Researchers call the release of the brain’s party chemical, dopamine, at the mere expectation of something novel the “exploration bonus.” You can get your bonus through incremental risk, one step at a time

GET TO THE BASE CAMP

Mountaineer Ed Viesturs, the first American to climb the world’s 14 tallest peaks, made a practice of not looking at the summit when he climbed a daunting peak. Too intimidating. “You see this rock in front of you and say, I’m going to go to that rock and then I’m going to stop,” he told me. His goal for the day is the base camp, not the summit.

In the course of doing a book on the power of engaged experience, Don't Miss Your Life, I met a host of folks who have applied the spirit of exploration to risks in their personal lives that have transformed their lives. Psychotherapist Sheila Gross turned the jitters of performing with a group of strangers into the most important feature of her week — singing in a community choir. Accountant Marty Herman transcended his social fears by becoming an ace salsa dancer in his 50s.

Breast cancer survivor Cindy Roberts overcame her battle with the ultimate fear through the power of dragon boat paddling. She knows the truth behind risk: There’s no such thing as security anyway. “There is no later. Live it now,” she says.

Mountaineers call the initial climb of a peak a “first ascent.” There’s an extra incentive in bagging a “first,” a distinction we can use to turn the discomfort of doing something new to its flip-side: excitement.

If you would like to get fear, anxiety, and stress under control, we offer programs for individuals and companies. Manage demands and thoughts, instead of the other way around. Click on one of the buttons below for more details on our stress management training programs.