Get More Done, Increase Vitality, the Engine of Productivity and Wellness 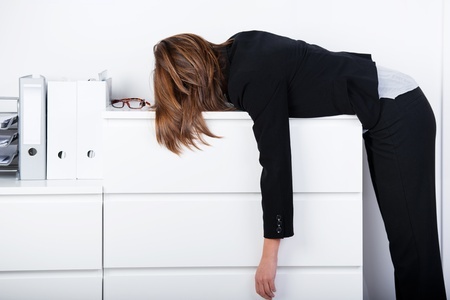 What would happen if for one day no one at the office had any caffeine? No doubt there would be colleagues collapsed in hallways and slumped over computer keyboards. Without artificial stimulation, most teams would have to close up shop for the day, since motors would be on idle. A no-caffeine day would reveal that one of the hallmarks of performance, and certainly wellness, is missing in action: vitality.

There’s not much of that commodity around these days. How would you respond, describing your state right now, to the following statements from the Vitality Scale, developed by the University of Rochester’s Richard Ryan and Christina Frederick Recascino of the University of Southern Utah—"not at all true," "somewhat true," or "very true":

--I feel alive and well

--Sometimes I feel so alive I just want to burst.

Judging from what I see in my work-life balance trainings, the only bursting going on is that of brain cells short-circuiting from information overload. Unbounded email and interruptions drain energy, which shuts down performance.

The reality we don’t appreciate is that humans are energy machines, like a car or a smartphone. We have to resupply energy used up, or we deplete the resources needed to operate our chief productivity tool: attention. Our brains alone use 20% of the body's energy.

Few of us stop to think about the state of our personal energy or that of the team, but when physiology is ignored, the race is on to burnout, a state of maximum exhaustion that is the exact opposite of what all leaders want, employee engagement. The key dimension of employee engagement is physical and psychological vigor, energy, vitality. It leads people to go the extra mile. We can’t even think about extra effort when we are tapped out from exhaustion.

Vitality is one of the hidden engines of engagement, work and life satisfaction, and a leading marker of happiness. It’s the gas in our tanks, and without it, we don't get very far. Vitality is low to missing in action at most organizations because we are led to believe that what creates the exact opposite condition of high energy, endurance and never stopping, is the ticket to productivity.

I call this the Endurance Fallacy, a false belief that undermines performance and its lifeblood, attention. Everything we know about performance says that energy, and, therefore, attention, wanes with time on task. That’s especially true in the knowledge economy where we are using brains, not brawn to do the job. The source of productivity is not how much of a pounding you can take physically, but how energized and refreshed your brain is.

The false assumption at the root of the exhaustion treadmill is that, because we are using our brains and not being taxed physically, we can keep going indefinitely. Brain scientists have told me that minds go down well before the body does. We all know that. If you’re a morning person, your brain is mush after 3 pm in the afternoon. Night people have their ebb in the morning hours.

Vitality has emerged as a key dimension in the sciences of subjective well-being and happiness, as well as self-determination theory (SDT), which finds that intrinsic motivation, not the usual external metrics—money, success, beauty, status—leads to satisfaction of our core psychological needs. The originators of SDT, Edward Deci and Richard Ryan of the University of Rochester, report that, “in vital states, people are more active and productive, cope better with stress and challenge, and report greater mental health.”

ENERGY AVAILABLE TO THE SELF

The kind of vitality we’re talking about here is not the kind that comes from nerve-jangling, five- hour energy drinks. Deci and Ryan define vitality as “energy available to the self.” It’s not something manipulated from outside but comes from within to those who allow their own refueling and maintenance equipment to do the job, from sleep to healthy eating. You can feel true vitality when you have it. You are in a highly positive state, ready to tackle anything. You have the power of possibility.

We can all get there on a regular basis without caffeine. Work-life balance and wellness programs such as the one I teach, Work Smarter, Live Better, can resupply vitality by giving teams the tools to manage energy-draining demands and activating life skills to recharge and refuel personal energy.

Vitality activates positive emotions and behaviors, such as positive affect, the visible sign in your expression and body language of optimism and buoyancy. Deci and Ryan say this makes us more open to purposeful action, initiative, connection with others, and gives us more focused performance, persistence, and resilience, as well as more equipped to combat stressors and demands. When we are exhausted or burned out, we are in a bunker, withdrawing from initiative and others. That is not a place where great work happens.

Maintaining vitality is both a physiological task and a psychological one. We have to get the right amount of sleep (at least seven hours), eat well, and exercise regularly. We also have to resupply mental resources, known as self-regulation, that are burned up when we use self-discipline or willpower, which happens whenever we try to get things done. And we need to find mental detachment from the strains and stressors that drain energy and vitality, so we can refuel.

Bolstering and fueling vitality throughout the workday and at home is essential to keep minds active and energized. What strategies does your organization have to promote vitality? Exercise programs at lunch have been shown to increase energy and productivity as a result. One study in Sweden found that even after subtracting 30 minutes a day from people’s work schedules so they could exercise at midday, they were more productive than if they’d worked the normal, additional two-and-a-half hours weekly

Deci and Ryan say the best way to boost stores of vitality is through activities that satisfy our basic psychological needs—autonomy, competence, and relatedness, or connection with others. But we have to have the right goal, an intrinsic purpose behind our actions. That means we act, not for an external payoff, but an internal one, such as learning, challenge, excellence, or service.

“The pursuit of meaningful activities, especially those associated with intrinsic goals, maintains or enhances vitality,” report Deci and Ryan. “These activities do not simply relax the self-regulatory muscle; rather, they can satisfy psychological needs and thus rekindle the energies lost from the more depleting conditions that are so pervasive in many people’s daily lives.”

True wellness, then, goes beyond maintaining physical health. It’s a state of mind that managers can support by promoting self-chosen, energy-boosting activities. Allowing people the option for breaks in which they can listen to music of their choice or play an online brain-building game, participate in a self-chosen activity or mastery experience at lunch, or be supported in their hobbies after work help build autonomy and competence, which generates vitality.

Like engagement, vitality can’t be commanded. It can only be enabled. But once it’s going, it’s a self-fpropelling agent, as long as we are getting refueled. Think of how much money you can save on caffeine bills.

If you would like to explore a work-life balance and wellness training or employee engagement program at your organization, click on the button below for details.