The Super-Medicine That Fights Colds, Cancer, and Setbacks: Optimism 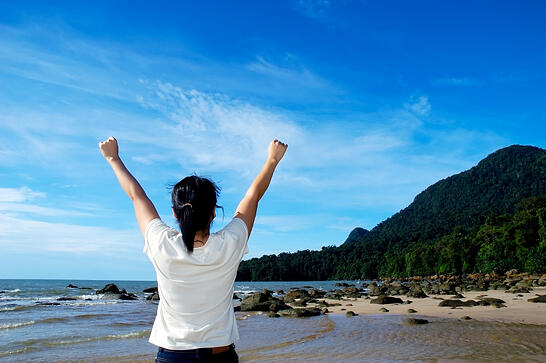 THE MOST POTENT WEAPON to promote good health and ward off serious illnesses is not what you’d expect—exercise or proper diet. Yes, they both definitely help the cause, but they don’t pack the punch of a mild-mannered wellness super-agent that can outperform the latest medical remedies: optimism.

A study of veterans who took the Minnesota Multiphasic Personality Inventory showed that those who had an optimistic outlook had 25% less cardiovascular disease than the least optimistic. In a Dutch study of almost a thousand people aged 65 to 85 optimists had only 23% of the death rate of pessimists. Those with high levels of optimism died at a lower rate than average, while pessimists died at a higher rate.

THE POWER OF POSSIBILITY

This same pattern holds in large population studies. The Women’s Health Initiative measured 94,000 women and found that those highest in optimism had 30% fewer coronary deaths than the most pessimistic. Women were given statements to agree or disagree with, such as “in unclear times I always expect the best” and “if something can go wrong for me, it will.”

What we tell ourselves about why things happen to us and what we expect will happen to us in the future play an astonishing role in our health, stress, success on the job, and relationships at work and in life. An optimistic outlook strengthens health, the data clearly shows. It creates a sense of possibility and mastery, which pays off a core psychological need, competence.

Optimism is a hidden elixir for much of what ails us, a free medication we all have access to. It's something that forms a key part of programs I teach—from keynotes ("The Power of Possibility") to stress management and work-life balance training. The skills of an optimistic outlook are so invaluable for health and relationships, I'd like to see them taught in school from an early age.

Optimism also prevents one of the most harmful responses to what life brings our way—learned helplessness, which drives powerlessness, pessimism, and depression.

The connection between mind and body is closer than we imagine. In a groundbreaking experiment, Carnegie-Mellon's Sheldon Cohen gave healthy subjects a rhinovirus that causes the common cold. The volunteers were first interviewed over seven nights to gauge their mood, such as energetic, cheerful, sad, nervous, or unhappy. Then the rhinovirus was introduced through the nose. People with high positive emotion before the virus got fewer colds than those with average positive emotion, and that latter group got fewer colds than the ones with low positive emotion.

This resistance dynamic also holds true for cancer. A metastudy that included 18 cancer studies involving 2858 people, found that optimism resulted in better cancer outcomes “at a robust level of significance.”

The quote and these findings were reported by the University of Pennsylvania’s Martin Seligman, one of the leading lights of practical positive psychology and author of Learned Optimism and Flourish. Early in his career Seligman set out to investigate the origins of depression. What he discovered was the power of pessimism to freeze minds in harm’s way, a paralysis of futility that he called “learned helplessness.”

He found that the way we frame negative events, the self-talk we concoct about them that leads to pessimism, is one of the most critical factors in human flourishing or flailing. One of the recipes for depression, he found, is failure meeting pessimism.

The story we tell ourselves when bad things happen either aggravates the situation by ginning up fear and pessimistic thoughts, or it gives us the power to be resilient and bounce back. All setbacks initially touch off exaggerated fears that create a false belief. Pessimists see that event, colored by the dire cloud set off by the stress response, in three ways, as Seligman detailed in Learned Optimism—“permanent” (you’ll never escape it), “pervasive” (the setback affects every aspect of your life) and “personal” (you get your ego and, thus, runaway emotions into it).

This pattern locks us into a worse-case scenario mindset that becomes self-reinforcing the longer it goes unchallenged. It leads to rumination that entrenches pessimistic and catastrophic thoughts. Beliefs of disaster and futility drive stress and the gauntlet of health conditions that can come from it.

Optimists have an ability to counter the false beliefs and projections of fear. They respond by not taking the event as permanent. It’s only a temporary setback. They don’t exaggerate the situation into something that spells doom for every aspect of life. It’s specific to the circumstance of this event. And they have one of the best habits we can have—they don’t take things personally.

When you let ego set off a flood of irrational emotions, that just makes getting the event behind you all the more difficult. Panicked emotions blind us to the instrument that can extricate us from the darkness, the rational deductive logic of our prefrontal cortex.

For you Star Trek fans out there, optimism is like the deflector shields on the Enterprise. It creates a force field that protects us from incoming attacks. Positive emotions have been found to broaden and build our emotional resources. They serve as a buffer in hard times. Negative events still hurt, but they bounce off if you’ve got enough juice in your positivity shields.

Barbara Fredrickson at the University of North Carolina, one of the world’s top researchers on positive emotions, along with mathematician Marcial Losada, have demonstrated that we need three positive to every one negative event to stay on the positive side, since the negative is so powerful—it’s our default as a species with a hyperactive survival instinct.

SING FOR YOUR HEALTH

To show you just how effective positive emotions are at activating biochemical resources, one of my favorite studies—which examined singers in the Pacific Chorale—found that joy and also the intensity of that positive emotion can increase immune protection. As I reported in my book, Don’t Miss Your Life, Cal State Irvine School of Medicine’s Robert Beck and Thomas Cesario discovered that a protein essential to fighting disease, immunoglobulin A, increased 150% during the chorale’s rehearsals and 240% during concert performances!

Since optimism helps you live longer and happier, it would seem that evolution selected out positive emotions as a survival strategy. Optimism keeps our options open. We are receptive to new ideas, people, and settings that can help us solve problems and survive. That doesn’t mean we need to be Polyannas or discount negative information. We just need to weigh the most likely stories for a given situation, not reflexively the worst.

The secret agents of positive emotion can only be called upon to assist our well-being, though, if we know they are there and proactively deploy them. That seldom happens, because the default to fear and negative emotions in times of duress blocks the way out of the trap. The false beliefs are piled high: Things will never work out. I don’t see anything getting better. I don’t have any power to change my situation. I don't have any luck.

The negative emotions that charge a bad mood are intense, and we can’t stop clinging to them. Try to make someone laugh when they’re in a funky mood—they won’t have it.

Building a healthier mind and body through optimism requires a new set of beliefs to counter the pessimistic and false neuronic burps that run our world when we are in blind reaction to events. Somehow I’ll get through it. I have the power to make choices that can change where I am. I’m not helpless, I can act. I know I can find a solution. Tomorrow’s another day. Maybe it will work next time.

Controlling self-talk isn’t the only thing that leads to optimistic outcomes. If we want to increase the strength of our optimism shields, we have to participate in things that create positive emotions—social activities with friends, learning and mastery experiences, recreation and fun, and on the job, be more open and less defensive, and ask more questions. Losada found that people who exhibited those latter traits had better rapport with colleagues (which increases positive emotions), and higher sales and performance.

Happiness doesn’t come from success. It’s the other way around. Positive emotions lead to success. The study that proved that, by Sonia Lyubomirsky, Laura King, and Ed Diener, showed that success for chronically happy people was largely the result of their “positive affect,” the expression of optimism and buoyancy in facial expression and body language.

The science of optimism is telling us that our well-being is in our own hands—and minds. The resources to reframe events from calamity to opportunity are within us. The strength to overcome is within us. The power to see our lives as not static and stuck but ever-changing, depending on our outlook, is within us. And only one person can turn that life force on. When we do, we alchemize positive emotions into the essence of our chief survival trait as a species: resilience.