Feeling Overwhelmed? You Could Have Attention Deficit Trait 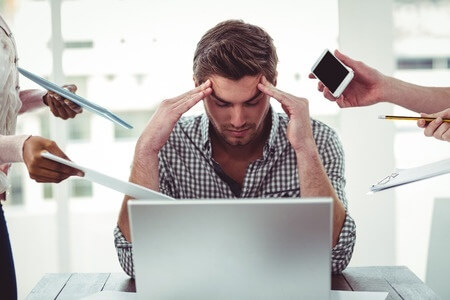 One of the most dependable stress triggers in the workplace is something that is epidemic these days: overwhelm. In fact, this state of having too much to do and not enough time to do it is the definition of stress, which happens when a demand overloads perceived ability to handle it. The trigger with overwhelm is the volume of to-do's combined with time limits that make us feel out of control—another on-switch for stress.

It turns out that the whole style of work today in a realm of unbounded technology eggs on overwhelm by overtaxing the surprising limits of our brain. Those limitations range from working memory (we can only hang on to a maximum of four thought chunks at at time), to data volume (how many agenda items we can keep orbiting the brain), to neural channels that restrict us to one cognitive task at a time.

Adding to the pile-on is the sheer volume of information overload most of us face, which is outstripping human bandwidth, undermining productivity, engagement, and work-life balance, and driving a burgeoning malady known as Attention Deficit Trait, or ADT. Attention Deficit Trait mimics the conditions of Attention Deficit Disorder, which is genetic. ADT, though, is a byproduct exclusively of environment—too many interruptions and excess data overwhelming brain neurons.

Many people I meet in my work-life balance training think they have ADD, but it’s actually Attention Deficit Trait, which is proliferating as the crush of email, texts, social media, Internet data, Instant Messages, and notifications overwhelm gray matter.

The information avalanche drives habits like multitasking that further compromise attention, forcing neurons to do what they weren’t designed to do—simultaneous thinking tasks. As studies from the University of Michigan to Vanderbilt have proven, we can’t do two or more high cognitive tasks at one time.

We may think we are having a phone conversation and doing an email at the same time, but, in fact, we are switching back and forth between tasks. There is a cost to this process: stress.

It stresses brain neurons out to have to jump back and forth between tasks. They have to stop, figure out where they were the last time they were there, and then where they were going. This slows productivity from 40% to more than 100%. In the process, attention is kicked from the top floor of the brain, the cerebrum, home of the rational and analytical, to rote and irrational floors such as the hippocampus and amygdala, which results in mistakes and emotional decisions.

People with ADT are highly distracted, impatient, and flit from one thing to the next.  They feel overwhelmed and unable to get anything done. They stand back at the end of the day and don’t see outcomes, just the undertow of more to-do’s than they can handle. A sense of falling behind makes them rush through the day to catch up, and that fuels stress.

One of the byproducts of ADT is a shorter attention span.  The more we check email, the more we have to check it. Interruptions erode the ability to regulate impulsivity. Some 44% of interruptions are self-interruptions, and for those with ADT, the number is no doubt higher than that.

The interruptions slow down performance and, as a study by Brian Bailey, Joseph Konstan, and John Carlis at the University of Minnesota showed, make you think any task is more difficult than it actually is. That jacks up annoyance, impatience, anger, and fear that you can’t keep up, which in turn triggers a false belief that you won’t be able to cope with all the demands.

The perception that you can’t cope sets off the stress response and time urgency, which constrict the brain to crisis mode. It’s as if your very survival was at stake with each task.

So what can we do to avoid the shortcircuiting of ADT? Here are seven ways to take back your brain:

1. Recognize Your Limits. The first step is understanding which limits the brain has and how to avoid overwhelming them—data volume, neural channels, working memory. Overload these channels, and you have blowback, from errors, to stress and burnout, to ADT.

2. Set Boundaries on the Incoming. Boundaries are the key ingredient to keeping ADT at bay—managing interruptions, devices, and priorities—and are also essential to work-life balance. Set the terms of engagement with devices, such as checking messages at designated times, as researchers from U. C. Irvine and Oklahoma State recommend.

3. Let Go and Delegate. Effective self-management is knowing when you don't have to do everything yourself. This is especially true for managers and perfectionists, who feel no one on the planet can do a task the way they do. That locks in extra hours, makes others feel they are not trusted, and drives burnout and micromanaging.

4. Carve Out No-Interruption Zones. Find times in the day when you can set aside an hour or more to do your high-concentration work without interruption. Maybe it’s the first hour at work. Skip checking email and go right to the tasks that demand the most attention.

5. Be Quick, But Don't Hurry. Rushing turns on stress, and then frenzy, frazzle, and impulsive, rash decisions and mistakes. Turn off the racetrack mind, take a breath, and focus entirely on the task at hand. Get other to-do’s out of mind by writing them down, along with a next-action for each. Don’t be run by self-deadlines that no one else but you are holding yourself to. Impatience is the tripwire for a pattern that leads to irritability, anger, the stress response, and clogged arteries.

6. Increase Attention. One of the best ways to combat attention deficit is to increase your ability to concentrate. The key here is focus on a target. Count from 100 to zero backwards. You have to pay attention more to something you haven't done before, so that focuses attention. Hobbies from chess to karate make you pay attention to rules and action to the exclusion of all the problems and to-do's that are in the other two tenses.

7. Take Breaks.  Humans are energy machines. Self-regulation resources we use to complete tasks and stay self-disciplined have to be replaced in the form of breaks, nutrition, exercise, and mental resets of even a few minutes. Every act of discipline makes the next act harder. Attention fades with fatigue, so make sure to keep your chief productivity resource charged and energized.

ADT is not something that happens to slackers. It’s a byproduct of working super-hard and taking on more data than the brain can process. Therein lies the way out. We can make adjustments to how we do our work and how we react to it and think about it that keep us from doing more than we can do well. After all, who's in charge here? The devices or the humans?

Our work-life balance, stress management and time management programs can help your team manage an unbounded world and beat stress, overwhelm, and burnout. For details, click on the button below.