Why Stress Keeps Your Team Out of Their Minds 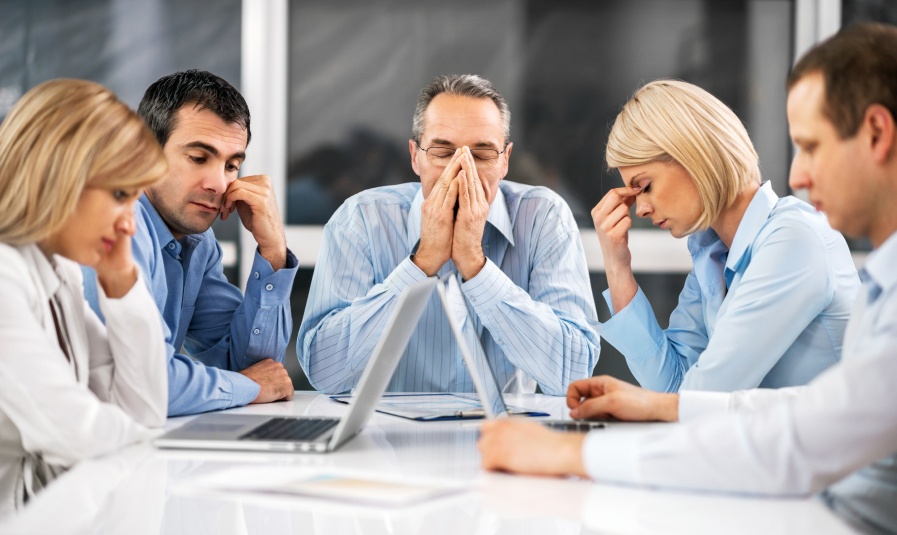 As a general practice, it’s not advisable to make important decisions while stone cold drunk. I'm feeling lucky—let's go to the casino. I’m going to send an email to the client and tell them what I really think.  We don’t want to make crucial choices when we are not in possession of all our faculties.

But that is what most of us do on a regular basis under the influence of something that sabotages decision-making ability as surely as too much Jim Beam: stress. When the brain is hijacked by the fight-or-flight response, we are under the command of an altered state, one in which irrational emotions, impulsive behavior, and an inability to see beyond the moment cloud sound judgment and reason.

Call it cognitive impairment syndrome, and it's hazardous not to just individual health but to the people around anyone who has it and company bottom lines.

STRESS IS A DECISION HAZARD

The effects of a mind bent by stress can be deadly. The world’s worst airline crash, when two 747s collided in the fog on a runway in the Canary Islands in 1977, killing 587 people, was the result of a pilot whose time pressure, i.e., stress, got the best of him and who "decided" to take off without the okay from the control tower.  Versions of this happen every day on the nation’s roads because someone is late or driving aggressively (high stress causes risky driving behaviors and a result more stress), and the impulsive moves or speeding results in an accident.

In the workplace there are a host of impacts of stress on our mental capacities, which can have a dramatic effect on productivity, quality, clients, and profits, but are rarely discussed when it comes to the need for stress management. They may be out of sight, but they are definitely not out of mind.

What stress does to the brain and attention is something every organization should take seriously. It's a major cognitive hazard, blowing up the rational functioning of the higher brain. Stress undermines decision-making, judgment, attention, impulse control, engagement, mood, social rapport, and self-regulation (discipline), among others, all of which affect output. It also drives aggression (see "Why Stress Makes Us Take It Out on Others"), which fuels tension and conflict.

Anything that affects the chief productivity tool of attention is going to impact productivity, teamwork, and workflow, so stress management for mental fitness should be as important as physical wellness to any organization.

Minds addled by stress get easily distracted, take longer to do tasks, act before they think, and make decisions not based on all the data but from a very narrow bias of what’s familiar or most recent. Studies show stress makes us not fully weigh the downside of a given decision (Mather, Lighthall), for instance.

Stress constricts the brain to the perceived crisis of the moment, so we can’t see the bigger picture.  It makes us discount negative data and err on the side of rash behavior turning out positive—say, swerving between two cars to make a light to get work on time—which amps up risk-taking behavior.

WE ARE OF TWO MINDS

It turns out that we are of two minds, two different cognitive systems, to be specific. Nobel prize-winning psychologist Daniel Kahneman explores their impact on behavior in his fabulous book, Thinking, Fast and Slow, which takes a deep dive into the surprising number of ways the brain defaults to poor decisions, deceptions, and illusions.

Most of the damage comes courtesy of fast thinking, which Kahneman refers to as System 1 thinking. This mode is triggered by stress, pressure, deadlines, overwhelm, and time frenzy.  Slow thinking, or System 2, is the deliberative process of weighing pro and con and reflective analysis.

System 1 plays a critical role in making quick decisions in moments of need or crisis, but fails us on a regular basis in a world where overreaction to social stressors keeps us in false alarm mode.

In an unbounded world of constant interruptions, time pressure, and digital bombardment, it’s no surprise that System 1 is getting a workout these days, and that is driving brains and performance south and ratcheting up false urgency and mistakes.

Stress undermines intellect in a variety of ways through an emotional hijack that takes the wheel from the 21st-century brain and leaves it with a part of the brain that thinks the year is 150,000 BC. Here are some of the major cognitive impacts of that handoff.

—Fractured Working Memory. Stress impairs working memory and undermines top-down attention in the prefrontal cortex and, therefore, control over events, while it jacks up task-irrelevant emotional distractors, as one study found. Working memory, which is also known as short-term memory, is what we use to get anything done in the day.

The problem is working memory is a very tenuous affair.  We can only hang on to three or four thought chunks for only a few seconds. Stress and interruptions break the tenuous hold we have on those thought bites, and they disappear into the ether. Interruptions fuel stress and make any task seem harder than it is. They also erode impulse control and with it, attention, by blowing up working memory.

The cognitive load of trying to stay on task as your emotions react to a disruption and the aggravation it causes slows reaction times and undermines accuracy (Arnsten, Goldman-Rakic, Dolcos, McCarthy). An interruption of 2.8 seconds doubles mistakes, while one of 4.4 seconds triples errors (Altmann, Trafton).

—Hijacked Attention. Our survival equipment is set up to direct our attention in a threatening moment away from whatever we are doing to the danger at hand. If a rhino comes charging at you, horn first, you can’t be thinking about a new dandruff shampoo you’d like to try, only your next move to get out of harm’s way—which is to find a tree to climb ASAP or jump out of the way at the last second, since rhinos have terrible eyesight.

It’s the same when someone or something pushes your buttons at the office. Your countermanded mind will be preoccupied by the stressful event that it thinks is going to kill you, so you can’t focus on the task at hand. The emotional alarm set off by the mistaken life-or-death drill overwhelms the prefrontal cortex’s ability to calmly concentrate and finish what you are working on. We ruminate about the stressful event, turning a false belief into obsessive thoughts that fuel future anxieties and can keep us distracted from what we are trying to do for hours, days, weeks, or longer.

Stress has been shown to reduce the goal-centers in the brain and increase the habit-formation centers, not a prescription for productivity.

—Knee-Jerk Decision-Making. Stress and rushing make us default to System 1 for decisions, and it’s not a good outcome. Decisions are made quickly without the full backup of facts, since System 1 is primed for instant responses. It has no time to dig deep into the memory banks, so it bases decisions on recent events and what’s familiar or feels right.

System 1 glosses over the details, makes impulsive choices, and uses emotionality to render judgment. It uses only the evidence at hand, not what’s absent, suppresses doubt, and is prone to confirmation bias—all of which can be a recipe for disaster when people operating on System 1 are making key decisions.

—Snap Judgment. System 1 makes us think we know things we don’t because of the vast amount of information it screens out in a snap decision. This is one of the reasons why rushing and time urgency result in a lot of mistakes. They drive impulse, gut, and intuition, which are not always correct in the emotionality of a stressful moment. Stress creates shallow, impulsive thinking, which can lead to everything from irate clients to coworker arguments. The belief is that there is no time for thoroughness. You are too busy for that. And, besides, you trust your unvetted gut.

—Depleted Self-Regulation Resources. To get anything done at work, you need to have the discipline to show up and stay on task. The willpower to do that, known as self-regulation, is undermined by stress and demands that surpass coping equipment.

When the emergency alarm is turned on, discipline crumbles as emotions take over. With less focus, it takes longer to do the job and more effort is needed, which increases cognitive load and strain. As self-regulation resources are burned up, it’s even harder to stay on task, but a lot easier to fall prey to junk food cravings to replace some of the lost resources, such as blood glucose, and distractions, such as going online to escape from demands. Productivity takes a tumble.

In multiple ways every day, stress is reaching into your team’s heads and compromising their ability to make the judgments on which your organization’s operations, performance, and bottom line depend.

The good news is that there are remedies for the smorgasbord of mental hazards set off by stress that restore attention and informed decision-making. A good place to start is an employee stress management training program that gives everyone the tools to manage demands—and suddenly get a lot smarter in a challenging world.

If you would like to learn how to cut stress and build resilient minds on your team, click below for details on our employee stress management training programs.