The 3 Engines of Employee Engagement 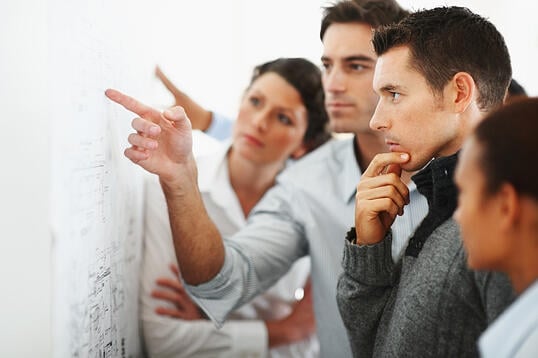 FOR MOST OF the lifespan of the field of psychology, scientists focused on the dysfunctional, the haywire, and failings of the psyche, but a few decades ago some researchers said, Hey, enough already. What about the other side of the ledger? What makes things go right? If we know the answer to that question, there’s liable to be fewer of us on the fritz.

The positive psychology movement changed the one-track focus from doom and gloom and reactivity to the building blocks of well-being and effective functioning. A similar switching of lens happened in the work realm, as researchers began to investigate what led to flourishing employees, instead of burned-out ones.

Researchers Wilmar Schaufeli, Arnold Bakker, Marisa Salanova, and Vicente Gonzales-Roma set out to find a measurement for employee engagement by exploring the positive antithesis to burnout. The key markers of burnout—exhaustion and cynicism—it turned out, are the opposite of two of the three dimensions the scientists found that mark the state of engagement: vigor and dedication.

Flipping the emphasis relieves the rear-guard action of trying to prevent the negative (fatigue, pessimism). Instead, smart managers can go on the offensive by creating conditions that allow positive burnout killers to thrive. It’s the difference between waiting for the roof to fall in and making that roof invulnerable to sudden collapse.

Schaufeli and company defined engagement as a “positive, fulfilling, work-related state of mind that is characterized by vigor, dedication, and absorption.” Absorption is the third element of engagement, which has a strong component of attention and focus.

The resulting high morale isn’t a momentary affair that can fade in a blink. Engagement is a broad and persistent engine that has staying power even amid setbacks.

Let’s take a look at the three main dimensions of engagement, how they operate as an antidote to burnout, and how they trigger the extra effort that can increase productivity by as much as 28%, according to Gallup.

1. VIGOR. It’s the veritable definition of an engaged and proactive person—someone who has not just the willingness, but the physical energy to go the extra mile, or, as it’s known in the trade, “discretionary effort.” The key element here is vitality, or energy available to the self, as the University of Rochester’s Richard Ryan has called it. When you have it, you have interest and aliveness, and feel the well-being that triggers positive affect, a magnetic force that can propel you and others beyond obstacles. You are willing to draw on that energy to go beyond the normal level of effort.

This is the polar opposite of the chief marker of burnout—exhaustion, mentally, physically, and emotionally. Someone with energy and vitality can’t be burned out because there are energetic resources to replace those that are used. Keeping the physical energy up, through strategies that help brains and bodies recharge on a regular basis, is an automatic hedge against fatigue and resource overload.

Getting regular exercise and enough sleep, 7 to 9 hours a night, is essential to refueling energy and, researchers are finding, cleaning out the toxic junk—beta-amyloids and tau—left over from the day’s mental workouts.

2. DEDICATION. This is the commitment piece of employee engagement. You want to do more because you are enthused about the organization, its mission, and your ability to make a contribution to the team and larger goal.

It’s the opposite of the cynicism that comes from burnout, which sees any self-initiative as futile and naïve. Burnout can’t coexist with the passion and loyalty of dedication.

The need to feel effective is critical to self-worth. Dedicated employees feel valued, because they have opportunities to contribute and make a difference. They feel a sense of significance, and as a result, derive meaning from what they do, and that intrinsic reward makes them want to do more.

Feeling effective counters another burnout characteristic, lack of efficacy. Employees who are committed to what they’re doing will keep at it, even if it’s challenging. They have internalized the importance of the product or service to the client or customers. As a result, they find satisfaction in handling difficult assignments.

3. ABSORPTION. When someone is engaged in their work, they are engrossed in it. Engagement brings another gear of concentration to the task, powered by intrinsic motivation, inherent interest in doing the task. The goal is not to get done with the work as soon as possible, but to do it in the best possible way.

Some researchers think that engagement is more about proactive attention than anything else. It’s a decision to immerse yourself in the task for its own sake, not for any external reward. The more attention you have on what you’re doing, the more you like it, remember it, and derive intrinsic pleasure from it, say researchers.

Absorption is the definition of optimal experience, also known as flow. When your skills meet a challenge in the moment, there’s a sense of mastery, a loss of self-consciousness, and a clear focus, not to mention a sense of competence and autonomy, and that satisfies two core psychological needs.

Detachment and withdrawal are hallmarks of burnout. There’s no detachment when you have full absorption in the task at hand, making it a bulwark against burnout behavior.

Burnout is extremely costly to organizations, from lost productivity, to absenteeism and medical bills. And it leaves nearly a third more performance on the table. Managers can inoculate themselves and their organizations against the downward spiral of chronic stress and burnout with the antidote of engagement, the vaccine of effort.

Our employee engagement programs can help you unleash the three engines of effort. If you would like information on our programs, click the button below for more details and rates.